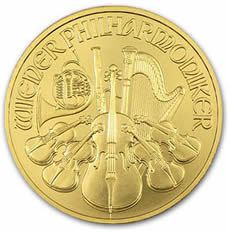 The Austrian Philharmonic is one of the purest gold coins that is available in the world today. Gold coin investors prefer the higher quality of gold that can be found in this coin and also the excellent design of the coin. The coin comes in one ounce and is also known by collectors as the Vienna Philharmonics. The coin can be compared in its purity to the Canadian Maple Leaf which also has a high gold content. It has come to be one of the most popular gold coins that is being sold having its peak in sales in the 1990s. The US however is not one of the most avid buyers of the coin and sales are still not doing as well as in the other parts of the world. The Austrian Philharmonic has a higher gold fineness than the Krugerrand and the Gold Eagle coins which makes them more costly than the two.

The coin can be bought from either the mint itself or through some second-hand dealer where the coin’s premiums can be more costly. The popularity of the coins in the United States has led to fewer secondary markets for this coin although it has a good performance in the primary market. It is similar to the performance of the Krugerrand in the secondary markets.

The coin features one of the pride of Austrian culture and music, the organ in Vienna’s most famous concert hall, the Musikverein. It houses the Vienna Philharmonic Orchestra which is considered to be the best in the world. The coin has a weight of one ounce and a face value of either two thousand Austrian Schillings or one hundred Euros depending on the date of their issuance. Hence, it is one of the gold coins that have a face value for two different currencies. The reverse side of the coin features the different musical instruments from the orchestra in such excellent detail making it one of the most beautiful coins in the world.

The coin is larger in size than the American Gold Eagle and the Krugerrand which only has a 32.7 mm diameter whereas the Philharmonic has a 37 mm diameter. It is also thinner than the former two in that is only has a 2 mm diameter. If you purchase the coins from the Austrian Mint they will usually be in rolls of coins in a plastic tube. The Austrian mint is one of the longest running mint operating for more than eight hundred years already. In that span of time, the coin has been able to turn up hundreds of designs in coins.