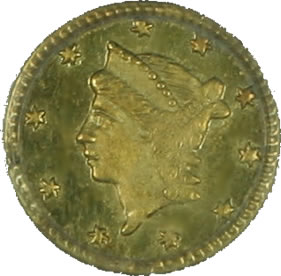 Genuine gold coins from California are highly sought after by coin investors who have an affinity for the Old West. During the famous California Gold Rush era, the numerous amounts of gold that were being produced in the mines necessitated the production of larger gold coins. This means that trades that may be done in smaller changes would be limited due to the lack of the particular coin that will suit the exchange.  Most of the coins that were being minted by the government were either too large or were being hoarded making them unavailable for circulation. So with this setting, some gold producers decided to mint their own smaller coins which will fit some of the smaller purchases that would need to be done on their trades. During that period either the dusts of gold or small nuggets were being used for smaller transactions.

During the middle of that century, gold manufacturers decided to make smaller coins which will have lesser values than that which was available. Thus, smaller gold coins were only issued by private companies and jewelers which saw the need for such smaller denominations. Most of the coins were produced during the 1850’s when there was a great demand for such coins. Most of these smaller coins produced in California are categorized into two types – those that were produced from 1852 to 1856 and those that were produced during 1859 to 1882. The first group was circulated and was used for trade and so shows much more signs of wear due to their usage. But the second type were more used for collection and hence are in much better conditions. The latter also possesses lesser amounts of gold.

The usual denominations for these smaller California gold coins are one dollar, fifty cents, and twenty-five cents. They come in various designs due to the different sources from which these coins were struck. You can find them in round shapes or octagonal shapes and they can be collected for their designs or  by their amounts. Either way, they are still a nice collection for the history behind them and also for their gold contents. They also have their owned designated numbers known as their BG numbers.

One of the more popular producers of these smaller denominations is the Frontier, Deviercy and Company which produced a vast amount of these small coins during the period. There also is the Louis Nouizillet and Company which made the more famous octagonal 25 cent coins. There are also both round and octagonal coins in all of the denominations in this era. Featuring various designs ranging from stars and dots to eagles and arms designs, one can surely enjoy collecting these coins for his own gold coin collections or as investments. There are a lot of sellers of these types of coins but one should be careful when choosing from whom to buy since there are a lot of fake dealers of these coins. Knowing that there is a demand for these limited coins, most have taken advantage of it to make some profit. Inform yourself with how the originals look like so you don’t become a victim for these fake coins.