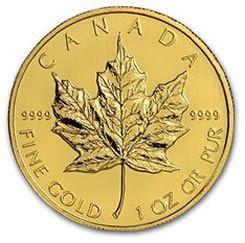 The Canadian Maple Leaf is the bullion coin of Canada and is issued by the Royal Canadian Mint. It was designed by Walter Ott and features the famous Canadian emblem on its obverse. It is made from either .999 gold or .9999 gold depending on the time on which the coin was issued. The later ones are made from the higher fineness as a sign of Canada’s higher standards in the production of gold coins. The coin is considered to be the purest type of gold coin that is available for collecting today.  The coin was first issued in 1979 to compensate for the market for gold coins as the South African Krugerrand was prohibited from being sold for some political issues. However, it can be said to be different from the Krugerrand in that it is made from 24 karat gold unlike the 22 karat Krugerrand.

The Canadian Maple Leaf is available in various weights ranging from one-twentieth of an ounce to one ounce. The face value of the coin starts from one Canadian dollar to fifty dollars but there is also a 1 kilogram coin which has a face value of one million dollars. In 1994 a one-fifteenth of an ounce coin was issued having a two dollar face value but it only came with a limited number of coins issued and were smaller in size which had made them valuable only as additions to jewelries. The coin proved to be not so popular hence the producing of the coin has been stopped.

In 2007, the mint issued a 1-million dollar gold coin which has a purity of 99.999% gold and weighs about one kilogram. It was issued to promote the popularity of the Canadian Maple Leaf and only a few were able to purchase the coin. This was done to promote the newer type of Canadian gold coin which has a higher purity than the past coins that were issued by the mint. It was sold at the price of two-and-a-half million dollars to three million Canadian dollars. The coin was designed by Stanley Witten.

The coin was manufactured with a .999 fineness of gold and was only changed to a .9999 purity in 1982.  The purest that was ever produced, one having .99999 fineness was produced to commemorate special events and was particularly difficult to store and handle as it is very soft being pure gold.  Most of the Canadian Maple Leafs that were issued from 2007 were usually designed by Stanley Witten and usually portrays Queen Elizabeth II on one of its sides. The coin is officially struck at the Ottawa branch of the Royal Canadian Mint. The high quality of gold that the coin possesses makes it very difficult to handle as it is more subject to being damaged by handling. This has been one of the drawbacks of having a gold coin in such a very high karat but if you are after the quality of the coin, this will not be such a big problem.