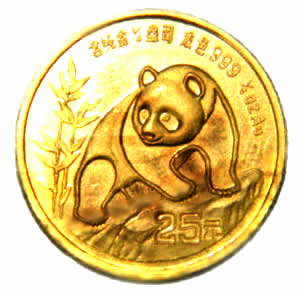 The Chinese panda coin is one of the most popular types of gold coins in the world. It is issued by the People’s Republic of China but it is available almost anywhere in the world. The coin was first issued in 1982 and they have been sold at several weights and in various depictions of the Chinese Panda making them one of the more highly valued gold coins to collect in the world.

The first gold coin that was issued in China in bullion type, the Chinese Panda is available in several different weights – one, one-half, a quarter, and one-tenth of an ounce. The one-twentieth part of an ounce type of Chinese Panda was only added after a year.  The designs of the Chinese Panda comes is a newer form every single year making them one of the most collectible item by numismatics. This was however prohibited by the Chinese government in 2001, making the 2001 and the 2002 issue similar in design. These coins are struck in different mints in China and they do not have any minting mark like those which can be found in gold coins in the US. What is does contain however, are the date of issuance, the face value and also the obverse design of the coin.

The coin has the Temple of Heaven in its obverse and also the Chinese inscription of the People’s Republic of China. It also has the year of issuance and also the indication of whether it is a commemorative gold coin or the theme of the coin. The reverse side of the coin features the Chinese Panda which is different every single year. The success of this coin can only be seen in the amount of coins that were sold during the 1980s. It was widely used not just for gold coin collecting but also as embellishments in jewelries such as bracelets and earrings and also in earrings. The smaller sizes of the coins made them very versatile not just as an investment but also for accessories.

The design of the panda was however halted in 2001 when the People’s Republic of China adopted a new policy but the ensuing clamor for the usual method – which is having a different design each year – brought the changing designs back in 2003. The coins are officially issued by the China Gold Coin Corporation and the official distributor in the US is the Panda America. The coins are used as a legal tender in China although the actual value of the coin exceeds its stated face value either 500, 100 or 25 Yuan. A one gram Chinese Panda was especially issued in 1991 to make the Chinese Panda more affordable for the public and had a face value of three Yuan.

The size and dimensions of a Chinese Panda depends on the weight of the coin which can range from one ounce up to one-twentieth of an ounce. There were weightier coins that were issued but the standard one ounce coin has a diameter of 27 mm and a thickness of 1.85 mm.