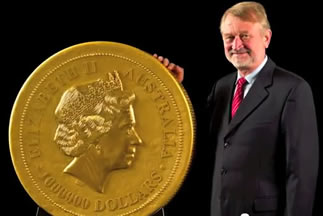 The Australian mint has just produced the world’s largest gold coin. The coin is worth more than $50 million and weighs an amazing 1000 kg which is the equivalent of 2.2 tons. The giant gold coin resembles a massive disk that features a kangaroo on one side and the Queen’s profile on the other side.

The coin weighs 1 metric tonne, is made of 99.99% pure gold, and measures 80 cm wide, by 12 cm deep. The coin is official Australian legal tender and is now officially the biggest gold bullion coin in the world. The purity from the Perth mint is guaranteed by the West Australian government. It took 18 months in total to produce the coin.

The coin was minted at the Perth mint in Australia. The CEO of the Perth mint named Ed Harbuz is recently quoted saying that releasing the coin was, “an incredible challenge, one which few other mints would even consider.” This record-breaking gold coin is at least 10 times the size of the next largest gold coin in the world. It has a denomination 1 million Australian currency, however the coin is worth much more due to its gold content. Perth Mint chief executive Ed Harbuz said the coin is “the pinnacle of ingenuity and innovation.”

The next largest gold coin was made in Canada by the Royal Canadian mint. CEO of the Perth mint, Harbuz said this about the competition for the world’s largest, “we thought well, we’d better make it so much bigger that it’ll stay the biggest coin in the world for a long time.”