Most experts agree that 1 oz gold coins are the best types of investment when it comes to buying gold.  Aside from the ease with which these coins can be stored, they also entail lesser expenses for the buyer.  The characteristics of this type of coin make them one of the most sought after coin in the market in terms of investing.  The one ounce coin has been the most popular in the Western hemisphere and has become a sort of standard when it comes to buying gold coins.  Aside from that, you can easily know how much your coin is worth since the amount or price of gold at the market is usually expressed in terms of one troy ounce.

One ounce gold coins became a fad with the advent of the African Krugerrand.  This coin, which was made from a lower karat of gold but has a weight of one ounce, became popular with investors since they are able to get a larger amount of gold at a lesser premium.  Most of the coins that time were smaller in weight but could be bought at a higher price only due to the cost of production.  With the lesser premiums came greater demand for the coinage which was produced by South Africa.  Although this demand was checked by the temporary ban on the coin due to the apartheid system during that time, it nonetheless left its imprint in the international market for gold.

After this, other countries began developing their own one ounce gold coins – the Australian Kangaroo, the Canadian Maple Leaf, the Chinese Panda, the Austrian Philharmonic, and the American Eagles and the American Buffalo.  Most of these coins are made from 24 karat gold exempting the American Eagle which has an alloy to make it sturdier against handling.  Pure gold is very soft and is not good if handled too much or dropped.  They are easily disfigured but with an alloy, it becomes more viable for storage.

Compared with other sizes, the one ounce coin is still considered to be the best when it comes to investing purposes.  The smaller types of coinage have higher premiums than that of the one ounce coin since the cost of production is usually just the same but the gold content is lesser.  Larger pieces such as ten-ounce and one-kilogram coins are just not that easily to transport and cannot be divided or split easily if you are in need of smaller quantities.  Hence, these types of coins are usually produced at lesser quantities and are only bought for other purposes aside from investing.

Aside from these reasons, it is also good if you can easily assess the value or worth of your gold at the current market price – which is expressed in one-ounce terms.  When investing, information is definitely a good device.  So if you can easily compute your investment’s worth – which is in one ounce coins – then it will be better for you. One ounce gold coins are definitely a better choice when thinking of investing your wealth in gold coins. 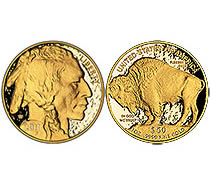 The American Buffalo gold coin is one of the purest types of gold coins in the world today. Having a purity of .9999, it ranks with the Canadian Maple Leaf as one of the most beautiful gold coins in a collection. It has a face value of fifty dollars while the gold content amounts to more than a thousand dollars depending on the prevailing price of gold in the market. It weighs for one ounce and hence makes a perfect coin for investing also. It was issued by the US Mint in order to produce a gold coin that will have the highest karat as a gold coin.

The coin has a diameter of 32.7 mm and its thickness is 2.946 mm. It has the design of the native American Indian and the buffalo at its reverse side. The pricing of this coin depends upon the current spot price of gold in the market which reaches to about $1,600 today plus the premiums that will be added to it. Finding this would be very easy as the internet now produces the current gold price in real time and also you can find the current selling prices from those who are dealing with selling gold coins.

The design of the coin was based on the history of the United States and the most prevalent themes in the past.  The person commissioned to do the job was James Fraser who is one of the best sculptors during that period. The design became so popular that it was used for the bullion coin and the proof silver coins on the past 2001 minting issue. There are several Indians who actually posed for the sculptor in order to serve as models for the Indian head.

The buffalo coin contains 24 Karat gold in one ounce. It was the first type of coin to be issued by the United States Mint having the highest type of gold purity.  The design however was based on the 1913 nickel which featured the buffalo and was henceforth known as the buffalo coin. It was supposed to enable buyers of gold coin to have an investment in .9999 pure gold in their keeping. The first coins to be issued were made during 2006 and has since marked the beginning of the manufacturing of high gold quality coins in the United States Mint. Although the value of the coin itself is already great, one can still appreciate the worth of the design that is contained in it. It is, in a way, a good method of presenting the rich history behind the making of the United States as a nation.  You can learn more about purchasing the coin directly from the U.S Mint here.

The minting of the coin was temporarily stopped on 2008 due to the subsequent crash of the economic market.  The coin however is still considered to be one of the best coins to have in one’s collection. It has been dubbed as “American Buffalos” or the “Buffalo Gold” as it has now been more commonly known due to its design. 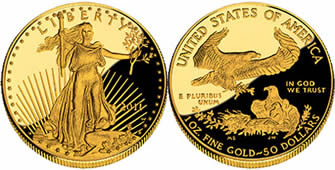